The following weather charts compares the weather of Las Vegas against Los Angeles.

For individual detailed weather on Las Vegas or Los Angeles.

The first weather graph displays the day time maximum average temperature, the second shows the average night time minimum and the final bar chart indicates the number of wet days per month. These weather charts visually compare the weather of Las Vegas to the weather of Los Angeles to provide assistance when planning a holiday or visit.

Los Angeles climate is pleasantly warm all year round with the daytime maximum temperature varying by only 5°C throughout the year. Las Vegas maximum temperature follows that of a inland desert region with cold winters and extremely hot dry summers. 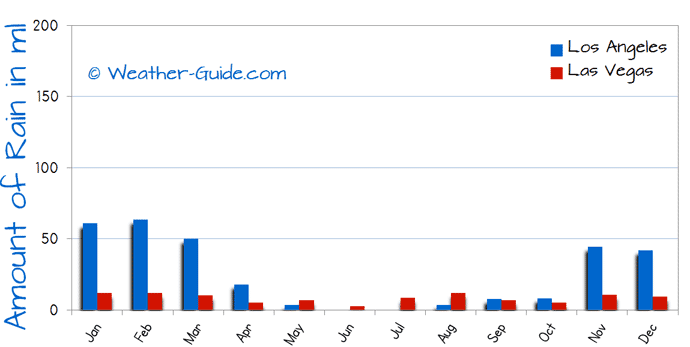 Both Los Angeles and Las Vegas are drying locations receiving minimal rain fall throughout the year. The majority of the rain Los Angeles expeiences falls during the winter months but this is significantly less than most other cities. 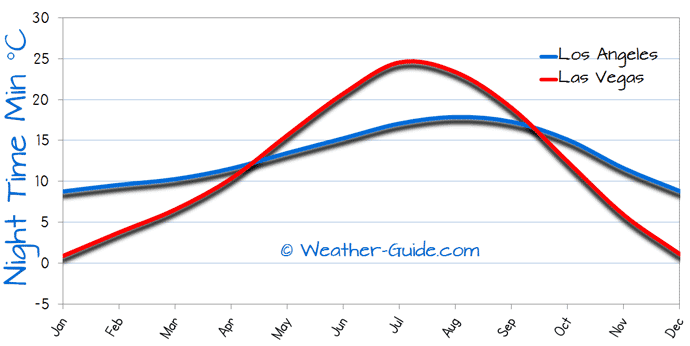 Los Angeles enjoys beautiful weather almost year-round, although summers can be quite hot. The average high temperatures in July and August are 86 and 84 degrees Fahrenheit respectively, while the average lows are 66 and 63 degrees. However, coastal areas tend to be cooler than inland areas, so residents often escape the heat by heading to the beach.