The following weather charts compares the weather of London’s with Los Angeles.

For separate weather information about London or Los Angeles.

The first weather graph displays the day time maximum average temperature, the second shows the average night time minimum and the final bar chart indicates the number of wet days per month. These weather charts visually compare the weather of London to the weather of Los Angeles to provide assistance when planning a holiday or visit.

The southern position of Los Angeles combined with the close proximity to the Pacific Ocean means that the city has constant good all year round weather. The maximum daytime temperature of London follows that of a city with four distinct seasons but without the winter or summer extremes.

Number of Wet Days in Los Angeles and London

England and London have a reputation for wet weather, with the number of wet days per month hardly altering during the year. The difference between winter and summer rains is the length and intensity of the showers which are much less in summer. 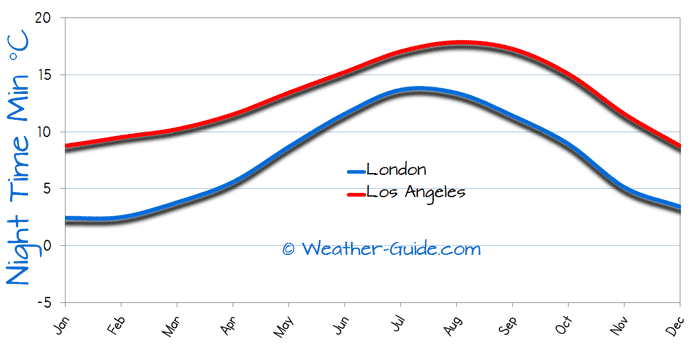 Night-time temperatures are cool too cold for both destinations and pleasant during the summer season.

Los Angeles enjoys beautiful weather almost year-round, although summers can be quite hot. The average high temperatures in July and August are 86 and 84 degrees Fahrenheit respectively, while the average lows are 66 and 63 degrees. However, coastal areas tend to be cooler than inland areas, so residents often escape the heat by heading to the beach.

The weather in London is famed for its unpredictability. The city experiences all four seasons, and each one brings its own unique weather patterns. Winter is usually the coldest and wettest time of year, with temperatures often dipping below freezing. Spring is a lovely time to visit, when the days are getting longer and the flowers are beginning to bloom. However, spring can also be unpredictable, with sudden showers or even snowstorms not unheard of.

Summer is generally the best time to visit London, when the weather is warm and sunny. However, heatwaves are not uncommon, and visitors should be prepared for occasional downpours. Autumn is a beautiful time to see the changing leaves, but it can also be quite chilly and wet. Despite the unpredictable weather, London is a wonderful city to visit at any time of year.