The following weather chart displays the monthly average weather conditions for Puerto de la Cruz, Tenerife. The blue line displays the night time minimum temperature and the red line indicates the day time maximum with each measurement as an average per month. The bar chart indicates the number of wet days per month that Puerto de la Cruz experiences. 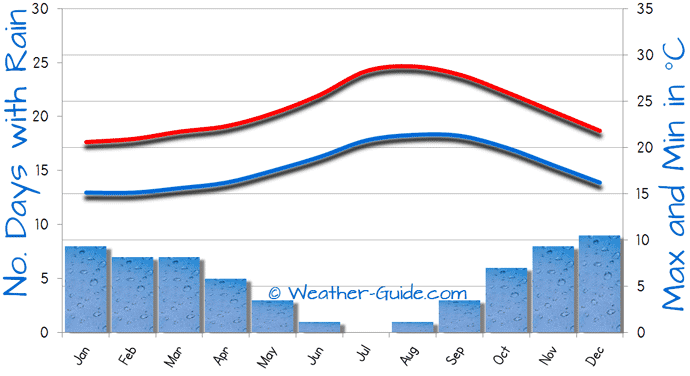 When to Visit Puerto de la Cruz for a Holiday

Puerto de la Cruz has the perfect holiday climate almost all year round making the island a popular destination not just in the summer but also in the northern hemisphere’s winter months. Puerto de la Cruz summers are very hot, basking under the sun of Europe’s most southerly set of islands. The true summer months last from late May until early September with the reminder of the year regarded as spring like weather.

The average daytime in Puerto de la Cruz temperature during the summer is 28°C but this is the reading in shade, in direct sun is much hotter. The winter maximum is a pleasant 19°C, which is both suitable for the beach and exploring the island.