The weather chart below displays the monthly average weather conditions for Phuket, Thailand. The average day time maximum temperature is shown by the red line while the average night time minimum is the blue line. The number of wet days per month that Phuket has is indicated by the bar chart. 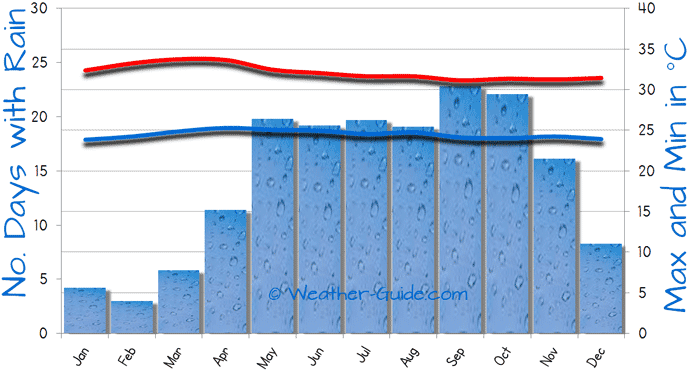 The average weather for Phuket, Thailand

When to Visit Phuket for a Holiday

Phuket and Phuket have two very different seasons which are almost equally split through the year; a wet season from May until November and a dry season from December until April. The weather in this region is classified as being a hot tropical monsoon climate under the Köppen climate scale.

The best time of year to visit Phuket and Phuket is between December through to March and this is classed as the height of the tourist season. The weather in Phuket during the tourist season is bright, hot but not to humid just the right conditions for an exotic beach holiday. The nights are refreshing as the temperature is lowered by a cooling evening sea breeze. There may be occasional rains but the showers are only brief and blue sky always follow. Sea temperatures of Phuket hover around 28°C all year round.

The flip side of all of this good weather is that Phuket experiences a very long and wet monsoon season that extends from May to October with September being the wettest month. The monsoon arrives from the south east and hits the Andaman coastline including Phuket weeks before mainland Thailand.

Do not visit Phuket or the west coast of Thailand during August through to October season, as the entire tourist industry shuts down while buffered by high winds and localised floods. For holidays between April to August consider the islands in the Gulf of Thailand which have a much later monsoon season.