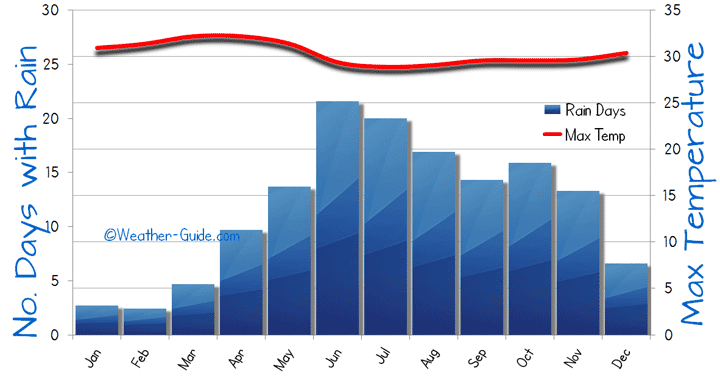 The average weather for Alappuzha, India 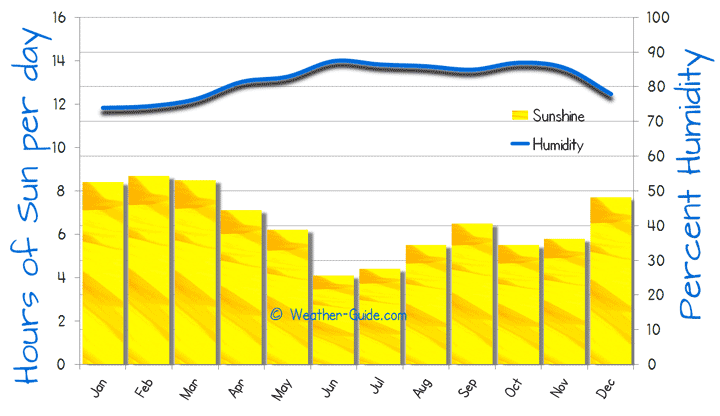 The above sunshine and humidity chart display the average conditions for Alappuzha. The amount of sunshine is the average amount per day while the humidity is expressed as a percent.

The above chart displays the maximum and minimum temperatures for Alappuzha, India

When to Visit Alappuzha

Alappuzha is famous for its canals which connect to the numerous waterways of Kerala. The city is a popular starting destination for many of the backwater tours or for the rapidly increasing number of house boat cruises. Alappuzha is more than a fresh water port with a good beach and a traditional centre that has been greatly improved.

The climate of Alappuzhax and southern India is hot and humid almost all year round with an extended monsoon season that makes travel almost impossible. The best time of year to visit Alappuzha is from Christmas through to early March with the reminder of the year suffering with either heavy rains or draining temperatures combined with near saturated humidity.

This short season is unsurprisingly the height of the tourist season with package resorts booked up and charging full prices. The days in the tourist season are hot with moderate humidity. Do not be surprised to see locals, especially those in uniforms, wearing jumpers and cold weather clothes while you are melting in shorts and t-shirts as this tourist season is their cold season.

The temperatures rapidly increase during May and are their hottest in late April. This heat combined with the huge amount of water from the monsoons increase the levels of humidity to unbearable levels. Evaporation from the skin is almost non-existent in the water saturate air and the prime tourist activity during the hot season is hunting for air-conditioning. For last minute package tourists there may be great offers during this season but the humidity will ruin a short holiday.  Simply do not visit Alappuzha during the hot season.

The locals of Alappuzha welcome the onset of the first monsoon rains which arrive in June from the southwest and the Arabian Sea. These rains do lower the temperatures but the intensity floods the region make travelling difficult and over whelming the poor infrastructure. The rains can be continuous for days and this season could be as equally bad for tourists as the hot season.

Just as the main Arabian Sea monsoon as decreasing Alappuzha experiences the second monsoon from the North West. This is less intense than the first but days are gray with prolonged showers. This continues from late September and slowly drags into December lessening over time.