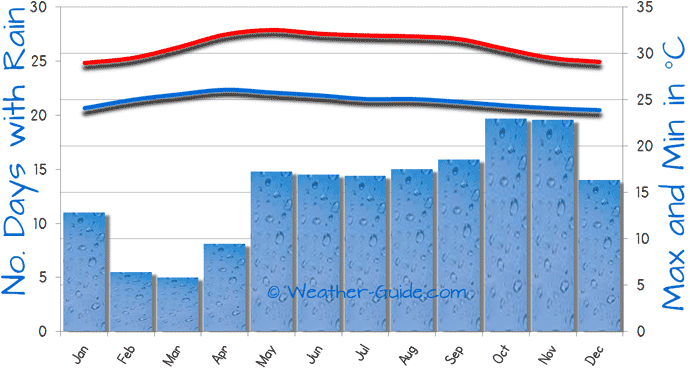 When to Visit Lamai for a Holiday

Lamai and Ko Samui are classified as having a tropical monsoon climate meaning that the island has a dry season and a wet season. The weather of Lamai realistically has three seasons; the horrid monsoon season which is thankfully short lived, a drier season and a hot season which has frequent heavy showers.

The dry season lasts from late December through to March and this is the main tourist season of Lamai. The tourist season’s weather is hot, bright and not to humid - just right for lounging on the island’s fantastic beaches. February is the driest month and under the Köppen climate classification is the only month which has precipitation levels that are regarded as a dry season. For a guide to Koh Samui and Koh Phangan click here.

Towards the end of the dry season the temperatures and humidity of Lamai increase. From April until the late autumn monsoons the weather of Lamai is the hot and humid with frequent downpours. These rains are short lived and there is always blue skys afterwards. Ko Samui’s location means that it avoids much of the south-eastern monsoon that punishes Thailand's Andaman coastline. If you are planning to visit Thailand during the summer months Koh Samui and Lamai would be a sensible location to consider.

Lamai is hit by a much later monsoon, which arrives from the south west and strikes between September and mid November. As a tourist avoid this season due to flooding and high winds that disrupt transport connections. Ko Samui as an island has less annual rain that the island’s main resort rival of Phuket.